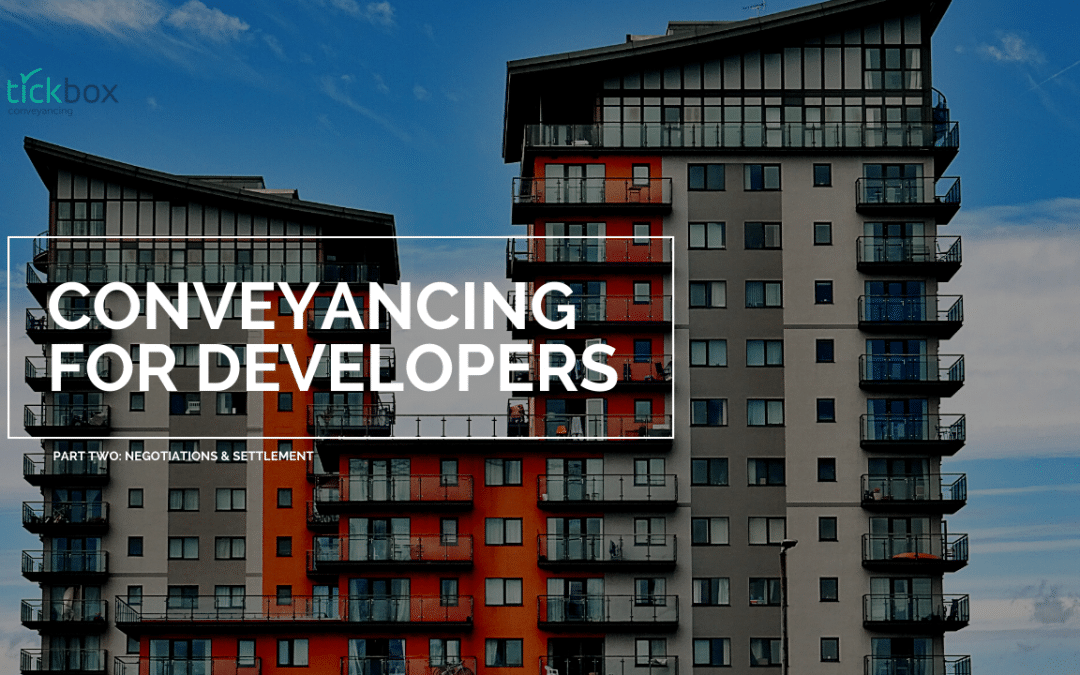 Acting for a property developer does not stop with the submission of final Contracts of Sale.

In Part One of our Conveyancing for Developers blog, we looked at the first two stages of the Tick Box Conveyancing process that has earned rave reviews from our developer clients.

READ MORE: “For me, conveyancing has always just been a process, but with Tick Box, it’s been much more than that.” – Read our development case study

In Part Two, we round out the process by looking at the final two stages of acting for a developer.

With the contracts drafted, approved, and provided to sales agents, off the plan marketing and selling can begin.

While making off-the-plan sales, potential purchasers and/or their representatives may have negotiations they would like to make on conditions within the contract.

Tick Box Conveyancing works closely with the developer and their appointed agents to work through any requested amendments to the contract.

“During the sales process, some purchasers may want to negotiate terms and our role when that happens is to provide the client with clear advice with respect to the amendments being sought, what it would mean,” Tick Box Conveyancing Director and Licensed Conveyancer Martin Galea said.

“Sometimes we might advise that an amendment request be accepted to secure the sale, other times it might actually be impossible to accept a negotiation because it will break a pre-sale requirement of our client’s lender.

“But we have to be aware of more than just handling negotiations or amendments to the contract.

“For example, part of our property conveyancing services is making sure that all pre-sale requirements are met.

“Sometimes, for example, banks will have a rule when financing a development that you can’t sell more than two lots to one particular buyer.

“For them, they might believe it is a risk if one person is buying multiple lots within a development because that represents a bigger risk to the bank.”

Tick Box Conveyancing assists developers by managing this negotiation process whilst also ensuring that in the process of closing sales, none of the pre-sale requirements is broken.

In doing so, Tick Box’s goal is to facilitate a fair outcome to all parties that help the developer get the sales they need and adhere to all their requirements and remains in our client’s best interests.

Stage 4 – The Road to Settlement

Once sales are made, the road to settlement begins.

Tick Box Conveyancing assists developers on this path with the provision of several important services such as:

Tick Box Conveyancing Director and Licenced Conveyancer said managing developments throughout were one of the most important roles a conveyancer in Melbourne has when acting for developers.

“We hold the deposits in trust and we can even make scope for deposits to be invested in controlled money accounts which would see the interest go to the developer if the contract allows for it,” he said.

“Once the sale is made, we record the sunset clause so that we know when the plan of subdivision and when applicable an occupancy permit both register and issue respectively need to be achieved by and as the project gets closer to completion we start to prepare for communications with the purchasers and lender in anticipation of settlement.

“We are responsible for letting purchasers know that completion is pending and that includes advising them of settlement 14 days out from when the Occupancy Permit is issued, and the Plan of Subdivision is registered.”

Tick Box Conveyancing uses e-conveyancing platforms like PEXA to be able to seamlessly manage multiple settlements at one time, ensuring timely completion of settlement and release of funds for our clients.